Giannandrea Poesio, who unfortunately died aged 57, worked as dance critic for Dance Europe, Danza e Danza and he was The Spectator‘s ballet critic and Director of the Research Institute for Media, Arts and Performance at the University of Bedfordshire. His career also included academic positions at the London Metropolitan University, the University of Surrey and Roehampton Institute.

A Florentine of immense charm and joie de vivre, Giannandrea was a former actor-dancer. He researched how Italy’s theatrical mime tradition fed into the French-derived classical ballet lexicon.  He showed that this tradition enriched the artistry of ballet stars such as Pavlova, Nijinsky, Markova and the choreographer Frederick Ashton. I first met Poesio during an introduction to the ballet “Excelsior” at Teatro alla Scala.  The passion that emanated from his speech hypnotized me. I felt that he was one uniquely able and probably willing to help me for my Master Thesis research.  I was right; we had a great connection. Only later I discovered that he was originally from Florence and had left to follow his passion, exactly like me. 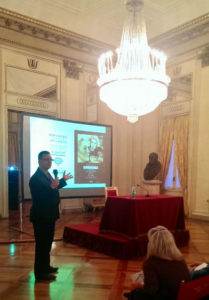 “The revaluation of globalization in dance – a question of identity”

Angioloni: What do you think of the trend towards globalization that is affecting every major dance company? Do you think that the needs of big companies to perform in a repertoire as wide as possible makes it impossible to maintain their own identities or do you believe that it would still be necessary for each ensemble to have a distinctive character?

Poesio: First of all I would like to apologize for the tone I’m going to use, but being sincere is the only way to contribute to your research.

In my opinion the concept of ‘globalization’, which so strongly dominates the contemporary dancing culture, stems from a lack of historical knowledge of that same culture. If the pseudo-experts were more knowledgeable, they would also know that, since the theatrical dance has developed as an independent art, its fortunes depended much – if not exclusively – on what we now call ‘globalization’. Just look at the agreements between Giuseppe Saracco and Marius Petipa for the Scala co-production of Sleeping Beauty, staged in Milan in 1892 and, above all, at various theaters and companies in the world (including the Scala, that secured Petrushka, Sheherazade etc.) that were anxious to ‘buy’ the Diaghilev’ productions during the 20s of the Ballets Russes. And these are just few examples of the ‘recent’ past – one could go back a few centuries. After all, the nomadic aspect of artists in the fields of theater, dance and music is the key factor in the development of a united European and global artistic culture.

Unfortunately, there are very few historical studies made on the practices of the past. In Italy the academic system still believes in pompous research aimed especially at a regurgitation of pseudo critical and pedantic documentations, that often bring little cultural contribution outside of Italy. In the Anglosphere, the concept of  ‘history’ is either ignored or regarded with suspicion, from those who are not eager to spend time researching, preferring to embark on phenomenological, ontological, ‘gender,’ speeches often formulated without a valid cultural impact.
Moreover, the idea of globalization, comes from the typical dance culture of the twentieth century, developed around the figure of choreographer-director, and of the so-called ‘choreographer company’.

With their mono-stylistic works Ashton, MacMillan, De Valois, Cranko, Lifar, Balanchine, Massine etc. led to the belief that certain repertoire, especially  classical dance, was developed on the basis of fixed stylistic formulas. Too bad that we forget that if it were not for a symbiotic exchange of styles and teachings, companies such as the Royal Ballet, the Stuttgart Ballet, even the Paris Opera (with Lifar) and the New York City Ballet would never have existed.
The ‘global influences’ of Russian, French, Italian and Danish currents, interacting with each other, have led to the success of those companies. 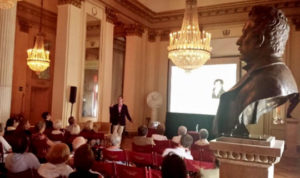 Jennifer Homans in her book “Apollo’s Angels” recently denounced the lack of theatrical geniuses like those named above in our contemporary dance culture. Although she didn’t, or maybe wasn’t allowed to say, that once masters such as Ashton, Grigorovich and Cranko left us, the idea of a mono-stylistic ‘company’ should be radically reformulated as the concept is no longer valid in the new century.

From the perspective of an artist, nothing is better than being able to come to terms with a varied repertoire which stimulates artistic and technical answers to challenging impulses. Sinking into only one stylistic current leads to an artistic atrophy which should be avoided.  History, (often ignored) is the proof: look what happened to the dancers of Diaghilev when, after a period of pure ‘modernism’ they had to deal with Sleeping Beauty – or to the dancers of the Royal Ballet, the first few times they were asked to grapple with Balanchine….

Do not forget that the dance culture lives and survives on the popularity of works that should not have cultural, political or geographical barriers. If such barriers were to exist, the already sick dance culture would receive the final blow.
Therefore, in my opinion, a company should be able to maintain its identity, even and especially while opening the borders of their repertoire (assuming that all the companies have their own repertoire, which is not entirely true).

A: Why do you think there is so much fear of touching the tradition at Teatro alla Scala? It seems that innovation here faces a lot of difficulties, compared to other international traditional companies.

P: I do not know what they are afraid of, since I do not understand which ‘tradition’ we are talking about .
Maybe one of the gargantuan ‘Italian Ballo’ that, despite what some historians would have us believe, remains an isolated phenomenon of a glorious past?
Or one of  Volkova, Bulnes, Balanchine, Ashton, just to mention some names of artists and representatives  from different traditions, who worked at and for La Scala?
Or are we speaking here of a pedagogical tradition that over time has incorporated French, Danish, Russian and other method ?
Or are we talking of the ‘classical tradition’ of the Scala, whose history is still inconsistent?

A: What do you think is the most important quality of a ballet director?

P: A ballet company needs an artist as its leader, who knows how to make decisions related to a well thought through plan, which aims to highlight the strengths of the company itself. This, for me, is the identity of a company, not a chauvinist style repertoire which is exclusively homegrown, as Mussolini would have wanted.

A: There is a great lack of young Italian choreographers, due to a system that certainly does not encourage new creations, at least in the classical field.
In your opinion what could facilitate the development of new choreographic talents?

P: They are missing not only in Italy, but elsewhere. Professionals like Wheeldon, Scarlett etc. are pumped to the maximum in the absence of something better (as written by Jennifer Homans in her Bestseller “Apollo’s Angels”).

Choreographers need to broaden their cultural background, especially about what it means to make theater. After all, Ashton knew by heart the lessons of Craig Gordon, Balanchine adored Stanislavski, Cranko and MacMillan were film experts and fans of the work of Truffaut etc.  De Valois brought her dancers to see Hogarth during the preparation of The Rake’s Progress etc.

What are they doing today? Watching television. The proof? Just ask, as I did, one of the ‘big Maestro’ of today, what does it mean – the use of arabesque in Giselle, Dark Elegies and Onegin. Only those who know the answer should become choreographers.

One of my future projects is to establish a research center to reconsider and promote a history of dance concepts for the benefit of those working in the sector. As you may know, in the UK we insist a lot on ‘practice as research’. I can feel that you are as passionate as I am about that subject so I hope that we will collaborate together in the future. 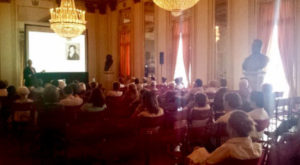 A: That would be amazing! What is the most serious problem of  the art of Terpsichore in Italy?

P: Is it really just an Italian problem? I do not think so. If one would look around with greater foresight and knowledge of the facts, one would see that the problem is common. Only look at what happened in Bucharest, at the Bolshoi and in Paris for example.

It is true that in Italy the dance sector has never been on a par with opera, for historical reasons. The solution therefore should provide for a total rethinking of how one manages this art – how you propose it and present it to the audience. But maybe this is fiction, as anyone of us who is left, knows well.

Unfortunately Giannandrea passed away before he could accomplish these projects and this article aims to pay tribute to a great ballet lover and to instill a desire to know and research more in  younger generations, but most of all to professionals responsible for those young people’s future in the dance world.

“Great dancing ought to be an explosion of joy in which technique – no matter how fab – does not come first. Those people who only go for deforming gymnastics ought to learn.”