Naples and Pompeii are celebrating this year the centenary of Picasso’s visit to Italy, which the artist undertook together with Jean Cocteau to work on Parade, which the Ballets Russes premiered on stage in Paris in 1917. During his visit to Italy, the artist went to Naples twice, between March and April of 1917 and to Pompeii. For this occasion a group of institutions including the Ministry of Culture and Tourism, the Soprintendenza of Pompeii, the Museum of Capodimonte, along with the publishers Electa, organised Picasso and Naples: Parade, an exhibition which was held at Capodimonte and Pompeii. More than sixty organisations from 8 countries have developed various exhibition projects on the theme “Picasso-Mediterranean” which will take place until Spring 2019, and the one in Naples was the inaugural event. […] 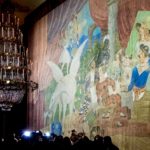 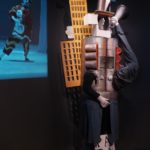 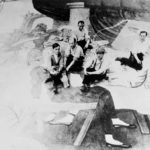 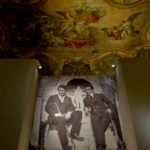 Parade became a part of 20th century cultural history because it was one of the greatest succés de scandal, a work of genius that was ahead of it’s time and therefore derided by many. Described as “a kind of surrealism” by the poet Guillaume Apollinaire, coining the word even before Surrealism emerged as an art movement in Paris, the ballet was remarkable for several reasons: it represented the first collaboration between Satie and Picasso and was their first ballet commissioned by Diaghilev.  […] However Diaghilev said: “Parade, is my best bottle of wine. I do not like to open it very often”. Today Picasso’s set and costumes are considered symbols of “the progressive art of their time”, and have only became more celebrated and better appreciated over the past century and I’m indeed glad that the special bottle was opened again!

In addition to the costumes Picasso designed a curtain which illustrated a group of performers at a fair consuming dinner before a performance. This iconic curtain, Picasso’s largest painting, was the symbol of both the exhibition and the performances and portrays most of the influential people that contributed to the realization of the show: Sergei Diaghilev, Léonide Massine, Igor Stravinsky, Fortunato Depero, Olga Khokhlova – a Ballet Russes ballerina and Picasso’s future wife – among others.

The story of Pulcinella, taken from a Neapolitan folk tale and unfolding in one single act, is told by Massine using academic steps with very expressive and Italian body language. This tribute to the commedia dell’arte portrays the amorous adventures of the Neapolitan character set in front of Picasso’s elaborate design dominated by Vesuvius, with cold tones evoking moonlight on the sea and the volcano in the background. There couldn’t have been a more appropriate setting than the Teatro Grande in Pompeii built in the II Century BC on the flanks of the volcano. Scored for 3 solo singers and instruments and defined by Stravinsky as “the epiphany through which the whole of my late work became possible”, this brilliant comedy highlighted the talent of the prima ballerina Rebecca Bianchi, whose feet and great use of bas de jambe were underlined by the black pointe shoes and tights on a white carpet. She gracefully danced with a very expressive and dynamic Pulcinella (Claudio Cocino) in the pas de deux “Se tu m’ami”.

Eleonora Abbagnato’s direction of Rome Opera Ballet is the proof that a good management can revive the fortunes of a company. The Rome Opera Ballet now boasts a host of young new talents and a very well balanced season. […]